BACK TO MAIN INDEX

Ramsgate is the very furthest east of England's south coast towns, and looks out towards France and Belgium. It is full of visual and architectural delights; a kaleidoscope of light, water, sky and buildings. The Royal Harbour creates a vista of hundreds of masts against a unique backdrop formed by a ramped approach road and arches of orange-red brick with brown stone-faced cliffs behind. There is a wealth of Regency squares and terraces. The cliff top views looking along the coast over Pegwell Bay into the winter sunsets are magnificent. They inspired J.M.W. Turner. Walk this shore and you are treading in the footsteps of Romans, Jutes, Saxons, St. Augustine and the Vikings. Richborough was a "secret" port in recent wars and the harbour, the landing place for thousands of soldiers from the beaches of Dunkirk in 1940. 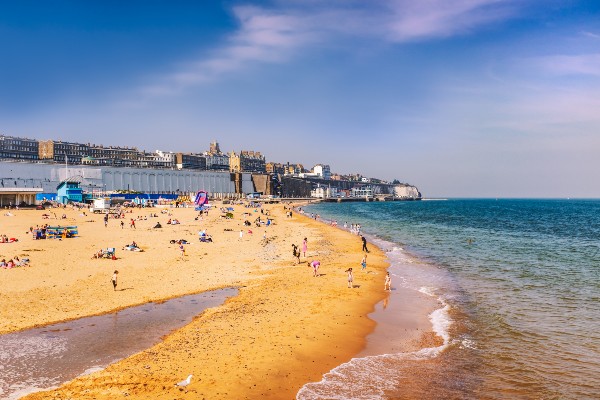 Ramsgate was once a tiny fishing village with a farming community close inland around St. Laurence. The Harbour enjoyed expansion and construction as a refuge from storms and the hazards of the Goodwin Sands in the late eighteenth century. The armies who fought Napoleon embarked here; hence "Military Road" and other road names such as "Plains of Waterloo". The "Royal Harbour" is so named because King George IV was pleased with the welcome he received. It became a fashionable resort when appreciated and frequented by the princess who became Queen Victoria. It grew as a popular resort for Londoners, most of whom travelled down river, the numbers increasing many times with the coming of the railways in the mid-eighteen hundreds.

Nowadays, the normal rail journey from London takes just under two hours, using high speed 1 it can take as little as 1 hour 16 minutes. Access by road has greatly improved. There is now a dual carriageway from the M2 (or from M25 via M20) to the town boundary. 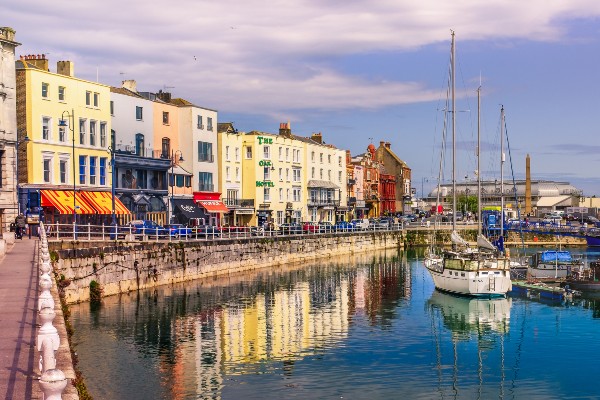 Ramsgate has shared the decline of traditional seaside resorts because of cheap package tours to the sun. Fishing from Ramsgate is on a small scale only now, although there are hundreds of enthusiastic amateurs. The Port cannot compete with Dover, our bigger and better placed neighbour, or with the Channel Tunnel, but there has been a limited service for Cross-Channel traffic. The Royal Harbour has great potential for further development as a base or port of call for yachtsmen, whose spending power is to the benefit of the town. The RNLI maintain a station in Ramsgate for both inshore and deep-water lifeboats, the Straits of Dover being the busiest sea-lane in the world.

The twenty-six miles of Thanet cliffs and beaches attract walkers and bird-watchers, especially at Pegwell Bay. The surrounding country is mostly rich arable land. There are plenty of interesting things to occupy days off: exploring the villages and countryside a few miles inland: three golf courses close by and four more within fifteen miles: Canterbury sixteen miles away: small boating from Broadstairs, Margate and Minnis Bay and yachting from Ramsgate.

The closure of the Kent coalfields and recession generally has contributed to unemployment, giving the Isle of Thanet one of the worst indices in the South-east. This has brought Government and European encouragement to diversify into light industry on Business Parks, which are being developed on the town boundaries.

Much of local employment at present is in the service industries, including Healthcare (Queen Elizabeth the Queen Mother Hospital is our newly refurbished and extended District Hospital at Margate.) Many people travel distances to work - London is too far for all but a few. Others work at Pfizer, the chemical "giant" at Sandwich which is now changing to a discovery park. Some workers will go to Maidstone, the Medway towns, Canterbury, Ashford, Folkestone for the Tunnel or Dover for the ferries.

Many of the town's houses were built between 1830 and 1910 and many households took summer visitors until about 1970. Language Schools have sprung up: their students, some of whom are here for weeks and sometimes months, need accommodation; thus replacing the older type of landlady trade. There is more modern building towards the western boundary.

MORE ABOUT OUR POLICIES